You’ve probably seen a million commercials – a group of friends in a small pub, laughing, talking – looking like they are extremely comfortable there.  Typically my nights are not like that – but last night it was – thanks to some good friends I hadn’t seen in years and Tired Hands Brewing Company.  http://www.tiredhands.com.

It all started innocently enough – I reached out to one friend who I hadn’t seen in probably eight years, and before we knew it, it was time for an ad hoc reunion for three of us.  So we tried to find the most convenient point to meet, and geographically, it was Ardmore, Pennsylvania.  Instantly, I told the group that we had to go to Tired Hands Brewing Company – you know, Philly Beer Scene’s “Brewpub of the Year” 2013.

Tired Hands, which only opened in 2012, won the Brewpub of the Year based on its brew – such as its HopHands Pale Ale (4.8% ABV, an aromatic pale ale brewed with oats and hopped with a blend of Amarillo, Simcoe, and Centennial); but also because of the care and passion inserted by Brewmaster Jean Brouillet IV into his new creations, like the Kickphone IFlip, (5.5% ABV), an IPA brewed with wheat and hopped with Citra, Simcoe, Centennial and Amarillo hops.

I was inspired to write about Tired Hands not only because of those brews that I sampled (which, of course, were outstanding), but because the entire evening made me feel as though I was in one of those commercials.  My friends were already seated at a rough-hewn wooden table when I arrived; the brick walls and warm lighting reminded me of a comfortable living room.  The bar and the wall behind, including the menu, were inviting in their earth tones. 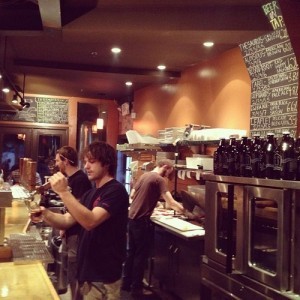 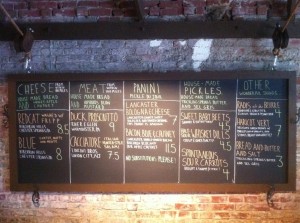 After a few minutes, and a few swigs of the HopHands, it was as if eight years had not passed and we were back in the “old days.”  We reminisced and laughed heartily – and ordered another round.  Jean gladly filled our glasses from behind the bar, and I can only assume he felt a sense of satisfaction that his establishment was the catalyst for such a  great night.

In my opinion, Tired Hands has mastered the concept of the brewpub – both in its fresh, quality brews as well as providing a welcoming place for its customers to enjoy them.  The combination of the HopHands, the cozy and welcoming design of the pub, and the reunion with long lost friends all lead me to strongly recommend that if you find yourself in Ardmore, or can find any excuse to get there, you must go to Tired Hands.  Cheers!

3 thoughts on “Anything But Tired…”