It’s Philly Beer Week – the annual celebration of America’s best beer drinking city that runs from May 30 – June 8, 2014!  Hundreds of events are planned at bars, breweries and restaurants throughout the week. It officially begins with the “Opening Tap” at the 23rd Street Armory at 7pm on May 30, where 40 breweries will serve the best of their best creations.  A schedule of all the events can be found on the Philly Beer Week website. 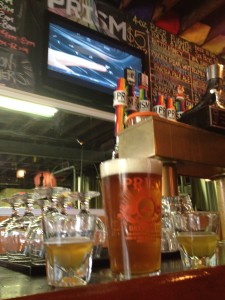 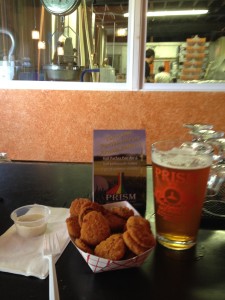 What made my visit to Prism very special was the fact that through the glass behind the bar, I could see the brewers, Rob and Matt, hard at work putting the bottles of brew into cases by hand.  Watching them, it made me appreciate their brew even more.  If you want to try their offerings, check their schedule to see where they will be during PBW14.

Have a great Philly Beer Week – maybe I’ll see you around! 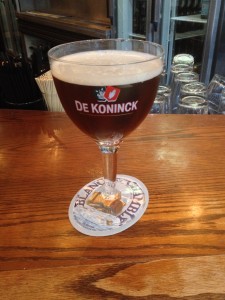 In the July issue of Philly Beer Scene Magazine, I take a look at Antwerp’s own Brouwerij De Koninck. Check it out – the digital issue is available online now, and the printed magazine will be in your “local” soon! 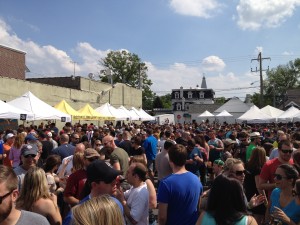 Last weekend I had a great time at the 14th annual Brandywine Valley Craft Brewers Festival hosted by Iron Hill Brewery in Media.  Check out my review of it on Philly Beer Scene Online!

Philadelphia’s brewing community, both old and new, were in full force tonight at the annual Best of the Philly Beer Scene awards at World Cafe Live.  With the return of “Joan Rivers” and a 60′ red carpet, the event, put together by Philly Beer Scene Magazine Publisher Mat Falco and Creative Director John Clark, was a joyous celebration of all things brew in the greater Philadelphia area. 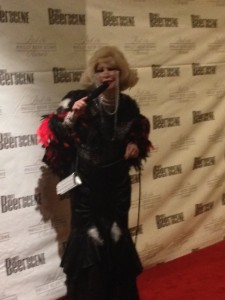 Hosted by Mike Lawrence, the producer of the film “Beeradelphia,” the Best of the Philly Beer Scene Awards show was a homage to representatives from breweries, brewpubs, bars, restaurants, wholesalers, distributors and all other aspects of the brewing industry in the Philadelphia area.  In addition to Philly Beer Scene icons Tom Peters, Fergus Carey, Jim Meiers, and Lew Bryson, up and coming stars like 2014 Brewer of the Year Jeremy Myers of Neshaminy Creek Brewing Company, Gerard Olson and Dan Endicott of Forest & Main Brewing Company, and Jean Broillet IV of Tired Hands Brewing were also in attendance. 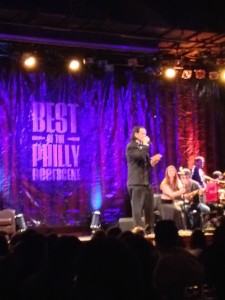 A few highlights of the night:

– A hilarious short film about the decision to make Mike Lawrence the host of the event, including previous year host Joe Gunn and Band of Brewers 2014 host Curt Decker, was  unfortunately cut shorter due to technical issues. (Stand by for the post on YouTube!)

– Freewill Brewing Company’s “Whit” beer, a Belgian white ale fermented with white cranberries created specially for the event.  Guests were treated to a draft of the brew in a commemorative glass as they entered, and received a corked, caged, and wax-sealed bottle as they left. 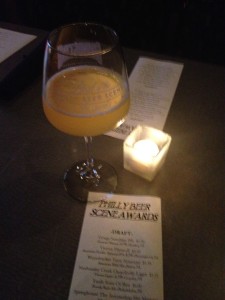 – Firkins of brew were available, including: 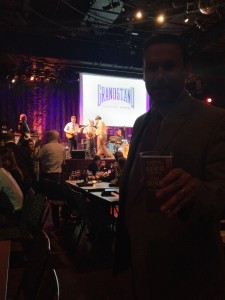 As it does every year, the Best of the Philly Beer Scene Awards again proved that the craft beer industry in Philadelphia is not only strong, but cohesive.  The true friendships within the Philly Beer Scene shone through on stage; it has been those relationships that have bolstered not just craft brewing in general, but specifically Philadelphia craft brewing.  Congratulations and thank you to all the nominees and winners!

It’s American Craft Beer Week – Seven days of celebrating the exceptional growth of craft brewing in the U.S. and the brewers who are behind it!  Make sure you get yourself to your “local” this week and thank them for all they do for craft beer (and you!)  U.S.A.!…U.S.A.!…U.S.A.! 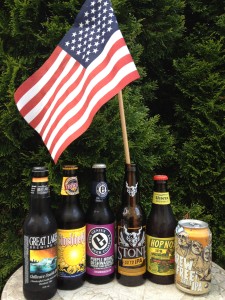