Iron Hill announced this week that it will be opening another location – in Huntingdon Valley, PA.  Here’s the press release:

HUNTINGDON VALLEY, PA – On Tuesday, August 2 at 5 p.m., the region’s most-awarded and fastest-growing collection of brewpubs, Iron Hill Brewery & Restaurant, will add a new location, their 12th across DE, NJ and PA, in Huntingdon Valley Shopping Center (785 Huntingdon Pike, Huntingdon Valley, PA 19006). The newest Iron Hill will focus on serving hand-crafted beer and from-scratch food, using only fresh, high quality ingredients designed to delight customers, all with the invitingly casual service and welcoming setting that have become the company’s signature over the past two decades. Co-FoundersKevin Finn, Kevin Davies and Mark Edelson will continue Iron Hill’s company-wide commitment to giving back to the communities where their brewpubs are located through a range of ambitious and worthy charitable initiatives.

Head Brewer Doug Marchakitus will guide brewing operations in Huntingdon Valley after spending the past three years at Iron Hill North Wales, and will open with Iron Hill’s six house beers on draught. In addition, Iron Hill Huntingdon Valley will serve the brewery’s most award-winning beers spanning their 20 years in business, including Bedotter, Crusher and Mahalo, Apollo! Following Iron Hill’s forward-thinking brewpub model, where each individual location has their own head brewer, Marchakitus will be free to experiment with interesting ingredients in the brewhouse and will debut Hopicana, a brand new IPA brewed with Chinook hops and infused with orange zest.

Finn, Davies and Edelson enlisted Street Sense, a design firm with offices in Bethesda, MD and Washington, DC, to create their new Huntingdon Valley restaurant, featuring comfortable dining areas, an open kitchen and an exposed microbrewery. The architects have created a brighter, more contemporary design allowing for all-access views of the brewery, which is highly visible behind the bar and enclosed in glass. Iron Hill Huntingdon Valley’s open footprint also showcases convivial communal tables and reach-in refrigerators at the host stand, permitting guests ample opportunities to take home their most popular and award-winning seasonal beers in both 16-oz cans and 750mL reserve bottles.

Huntingdon Valley will also feature Iron Hill’s first-ever Beer Garden, an outdoor bar and patio area with 40 communal seats and tables, complemented by free-standing Adirondack chairs, that will remain open in the brisker months (except winter), with the addition of heaters. The outdoor bar, covered by a canopy, will include 16 draft taps and a thoughtful selection of house wines. The restaurant’s full menu of tantalizing shared plates and composed dishes will be offered to guests choosing to dine al fresco. The Beer Garden will open in early August.

Iron Hill Huntingdon Valley marks another massive step in the careful growth of the company, after announcing their partnership with A&M Capital Opportunities, a private-equity firm. With a sterling reputation for great beer, Iron Hill collected five medals at the 2016 World Beer Cup held this past May. Company-wide, their beers have accumulated 44 medals from the Great American Beer Festival (GABF)and 30 medals from the  World Beer Cup (WBC), the nation’s top beer festivals, including WBC top honors of “Champion Brewery and Brewmaster” on three separate occasions (2010, 2012, 2014). In addition, their restaurants have earned more than 100 “Best of” nods from local and national publications.

About Iron Hill … Founded by home brewers Kevin Finn and Mark Edelson and restaurateur Kevin Davies in Newark, DE in 1996, Iron Hill Brewery & Restaurant has blossomed from one restaurant and brewery to 12 locations across the mid-Atlantic. Each restaurant is dedicated to producing and serving top-quality hand-crafted beers and cuisine in a warm and hospitable setting, and all are open seven days a week for lunch and dinner. In 2014, Zagat honored Iron Hill by naming them the most popular restaurant in Philadelphia, and their beers have earned 44 medals from the Great American Beer Festival in an unbroken 19-year winning streak that continues today. In November 2016, Iron Hill will celebrate their 20thAnniversary. 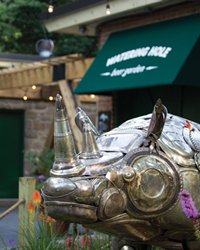 The Watering Hole.  Photo courtesy of the Philadelphia Zoo.

The beer and food menu can be seen here.

Open Friday through Sunday, 11am to 4pm, The Watering Hole will be a nice addition to the always enjoyable Philadelphia Zoo.

Evil Genius Brewing Company, known for their pop culture-named beer like “Hold Me Closer Tony Danza” IPA and “Ma! The Meatloaf!” Mango Wit, have opened a new brewery location in the Fishtown section of Philadelphia.  To celebrate, Evil Genius, in conjunction with Home Brewed Events, will be hosting a beer garden from July – October.  The press release is below – stop by and enjoy!