Thanksgiving Eve events and new releases are ready to make you extra thankful this holiday! Have a peaceful Thanksgiving!

Sly Fox Brewing Company released its “Hop Project No. 004 Pils” today. The press release describes it as “Hopped exclusively with the prized noble German variety, Tettnang, and packaged unfiltered, No. 004 is a majestic Keller Pils bringing a lively lager to the Hop Project series.” Try it soon at their Pottstown and Phoenixville locations, or in cans at select locations….

…And Sly Fox also has released it’s Christmas Ale too! “If this one doesn’t get you into the Christmas spirit, you truly are a Scrooge!”

Riverhorse Brewing Company will hold its “Out of the Cellar” event on Saturday, December 9 from 7 – 10pm. “All of our most limited beers from throughout the year – together at one event!!” Tickets went on sale on Saturday, November 18 – follow this link to get them soon!

Levante Brewing Company’s Firksgiving Eve (Wednesday, November 22) will be an opportunity to enjoy their brew and help others at the same time. According to their release, “A free 10 oz. pour of “Citra Hop Necessity” to anyone who walks in the door. Also, if you bring a new unused toy to donate to “Toys for Tots” we’ll hook you up with a $5 crowler or $10 growler fill of Citra Hop Necessity. This is our small way of saying thank you from Team Levante for your continual support of what we do.
Helping Other People (H.O.P.) is a built into our mission, so let’s fill up the donation bin with toys and send you home with some hops! Stay posted for announcements on 2 specialty firkens for the event.

Conshohocken Brewing will also host a Thanksgiving Eve event – “Wednesday November 22nd we have everything you need to take it easy for Thanksgiving. Stock up on take out beer with cans and all non-imperial 64oz growler fills are 1/2 off! Take out beer is available at both the Conshohocken Taproom and Bridgeport Brewpub.” 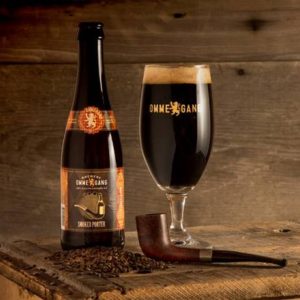 Have you tried Brewery Ommegang’s Smoked Porter?  Looks like a perfect beer for the cooler weather….

(COOPERSTOWN, NY) As cooler weather settles in on the northeast, Brewery Ommegang is pleased to introduce their latest limited edition brew: Ommegang Smoked Porter. This nod to a traditional English beer is brewed with subtle additions of smoked malt and a touch of Saaz hops to add additional depth and character to an otherwise traditional English brew. While the style is a departure from Ommegang’s traditional Belgian-style beers, the characteristic aromas of chocolate malt along with caramelized sugar are reminiscent of many things Belgian, and of all things good. Smoked Porter is available now in limited quantities in four-packs and on draft while supplies last.

Smoked Porter is brewed with a carefully crafted blend of Pilsner, Special B, Munich 20, Cara-20, Midnight Wheat, chocolate malt, and smoked malt. Balanced hopping is achieved with Saaz, while fermentation with American ale yeast ensures the malt remains in the spotlight.

This 7.6% ABV beer pours a deep dark brown – almost black – with a thick tan head. Aromas of cocoa, burnt sugar, and roasted malt give way to subtle hints of smoke. The flavor follows the aroma with rich notes of cocoa and roasted malt, followed by caramel sweetness and mild smoke. A medium-full body leads to a well-rounded finish with lingering smoke on the backend.

Smoked Porter is a wonder accompaniment for a variety of foods. Pair smoke with smoke – and enjoy with smoked meats and cheeses. It’s also an ideal charcuterie beer, and a wonder pairing for rich confections like chocolate cheesecake.

Keystone Homebrew Supply will celebrate its 25th anniversary this Saturday, November 18, from 2 – 9pm. They’ll be pouring wine, cider and brews, and some local breweries will be there too! Live music by The Counterparts, food from The Pizza Wagon, games and giveaways will round out the day. Details can be found on their Facebook page.

Skadoosh IPA by The Alchemist – thanks!

Special thanks to a secret source who shared two amazing brews with me from The Alchemist Brewery in Vermont – Skadoosh IPA and The Crusher IPA. Oh – and a Super Session #8 IPA from Lawson’s Finest Liquids! What a great IPA week! 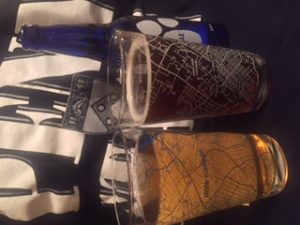 As college football bowl season swings into high gear, Uncommon Green has launched its College Town Maps line of glassware, a collection of pint glasses that are painted with a detailed map of your favorite college town.

The selection of colleges is wider than expected – not only are large schools like Penn State and USC available, but also smaller institutions like the Patriot League’s Bucknell University and Lehigh University. Simply search the alphabetical list of over 100 college towns on the website to find your favorite. If your college town doesn’t appear on the list, follow the instructions on Uncommon Green’s website and they will create it for you.

The pint glasses come in a set of two, painted in two official school colors. The maps are detailed enough that you can find your old local pubs and fraternity / sorority houses, and maybe even retrace a walk of shame.

The colors included in the Penn State set (white and blue) and the Bucknell set (orange and dark blue) are vivid and accurately depict the colors of those schools. They are advertised as dishwasher safe; attempts to scrape portions of the roads away from the State College glass with a fingernail proved fruitless. 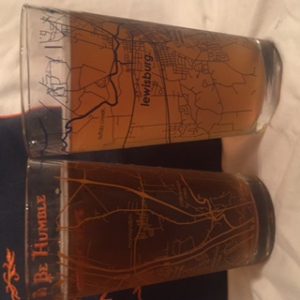 The Bucknell pints are ready for another run to the NCAA tournament! 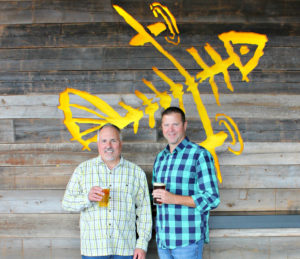 New Jersey based Flying Fish Brewing Company, opened in 1995, announced this morning that Gene Muller, founder and brewer, would be changing his role to “Founder.”   Here is the announcement:

“As a lifelong resident of the Northeast, I’ve admired Flying Fish Brewing for years, because Gene and the team have been industry pioneers in so many ways. This is not only evident in the well balanced and diverse portfolio of high quality beer being crafted, but also by the way they’ve placed values like “community” and “sustainability” at the forefront of the company for decades. Having a chance to join this already successful team is an exciting opportunity for me personally, and I look forward to extending Gene’s vision for Flying Fish for years to come.”

Romano, who began working in the beer business at age 16, comes most recently from Oskar Blues Brewery, where he served as National Sales Manager since 2013. Before that, Romano served in a variety of capacities, including Director of Marketing & Wholesaler Development, for D. G. Yuengling & Son. Other relevant experience includes Resort Beverage Company, West End Distributors and Nittany Beverage.

I’m excited to be working with someone of Lou’s background to help Flying Fish continue to expand and thrive. We built a state-of-the-art facility and his experience is just what we need to move to the next level.” says Gene Muller, Founder. “It’s great to begin the next chapter of the Flying Fish story. The role of Founder will allow me to concentrate on high-level initiatives while staying deeply connected with the brand I’ve built.”

Romano’s hiring is the culmination of a three-month search, during which several candidates from top-tier craft breweries were interviewed.

Yards Brewing Company will hold a Grand Opening Celebration for its new facility at 500 Spring Garden Street, Philadelphia on November 16. Read the press release below…

Riverhorse Brewing Company will hold their Stoutfest on Saturday, November 11. There are still tickets available online – follow this link to order tickets and more information!

Philly Beer Week has launched their annual Brew with a View Raffle! If your ticket gets selected at the drawing on November 15, you’ll be heading to Brouweij De Brabandere in Belgium to brew a collaboration beer with the local brewery of your choice. One ticket costs $5, but you can buy 5 for $20. Purchase your tickets online here – quickly!

Brewery Ommegang has released its newest Game of Thrones Beer, “Winter is Here.” It is available now in bottles and on draft. Read my previous article about it here, and look for my first impressions of the brew this weekend on Instagram, Twitter and Facebook when I crack my bottle open!

Southern Tier has expanded its Pittsburgh Taproom with a 7000 sf outdoor patio. I was there last summer before the addition, and now I can’t wait to get back! Read the press release here.

TAPROOM SET TO OPEN IN NORTHERN LIBERTIES,
WITH CHEF JAMES BURKE LEADING THE KITCHEN
The largest brewery in the city will open 70,000-square-foot facility,
complete with executive chef, private event space and state-of-the-art brewhouse.
This November, Yards Brewing Company will open Yards Brewery and Taproom at 500 Spring Garden Street in Philadelphia’s beer-savvy Northern Liberties neighborhood. The highly-anticipated expansion and move from their cozy tasting room on Delaware Avenue further establishes Yards as “Philadelphia’s Brewery” and provides them with a new 70,000-sqare-foot facility to produce their approachable ales and lagers, with a canning line slated to arrive in early 2018. Located less than six blocks from the famed Liberty Bell in downtown Philadelphia, Yards is the most recognized brewery in the city, and one of only a handful of urban, regional breweries in the entire United States.

“Yards is continuing Philadelphia’s brewing history, carrying on the proud and rich traditions of Philly’s breweries that came before us,” says Founder and Brewmaster Tom Kehoe, a man WHERE magazine called The Mayor of Beertown. “Those early breweries were very much stitched to the fabric of the city, serving as integral parts of the community and helping lead downtown revival efforts. Since opening our doors in 1994, that is something we have always strived to do – and this investment only strengthens that commitment.”

The menu will be divided into Snacks, Sandwiches, Entrees and Desserts; and the kitchen will serve food until one hour before closing time. The bar will feature 20 total taps: including all Yards signature beers and a number of limited releases only available in the taproom.

Chef Burke’s menu will evolve as the taproom evolves, but items may include:
· Yards Patty Melt, Brawler Onions and Swiss
· Crab Toast, with Calabrian Chilies and Chives
· Smoked Cheddar Bratwurst, with Sauerkraut and Housemade Mustard
· Roast Pork, with Fermented Broccoli Rabe and Provolone

Chef Burke has been a visionary in the city’s diverse culinary scene for the past 15 years and he has worked alongside nationally acclaimed chefs and forward-thinking restaurateurs, including Daniel Boulud, Marc Vetri and Stephen Starr. Helming the kitchen at Yards Brewery and Taproom will be a homecoming for Chef Burke in Philadelphia, where he was a three-time semifinalist for the James Beard Award as chef-owner at JAMES.

Bucknell University – which I am proud to call my alma mater – publishes a quarterly magazine called “Bucknell Magazine.”  This summer’s issue had a fantastic article about food production and sustainability, and a side piece about Bucknellians involved in the wine industry.   Sadly, it was devoid of any mention of our craft beer industry, and the Bucknell grads entrenched in it.   So I voiced my opinion about it – check out the Letters section on page 3!