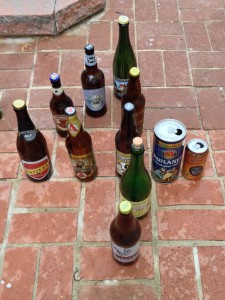 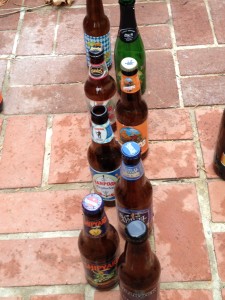 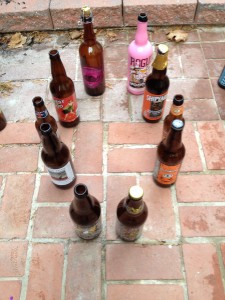 This countdown was a great reminder of the craft brews I met this year! 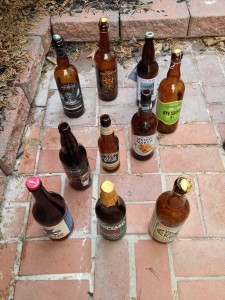 If names like Q-Bert, Pac-Man and Asteroids bring you fond childhood memories, and if names like Victory, Neshaminy Creek and Yards bring you delicious memories of last week, then Barcade Philadelphia is the place for you. 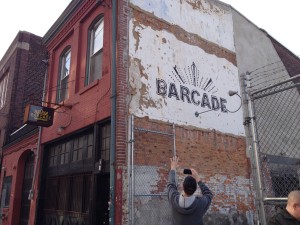 Barcade is nestled in an old industrial structure in Philadelphia’s Fishtown section; the brick outer facade and original interior ceiling beams remind you that this building was not always the beacon of fun that it is now.

As you enter, the bar greets you with almost thirty taps of craft beer from local breweries as well as others from around the country.  When I was there, Neshaminy Creek’s “Reanimator” was on nitro, and a collaboration brew between Barcade and Victory – Fall Bockwards – was available. 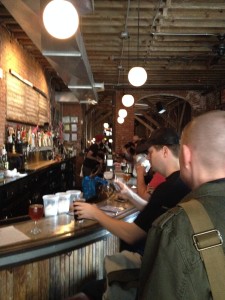 There are about 10 classic arcade games in the front of building, but the back is where the big action is.  From Centipede to Asteroids to Kung Fu Master, the collection of games invites you to relive the days of your youth on the boardwalk or in “the Mall” – the colorful lights and sound effects immediately evoke memories of high scores earned after hours of concentration.  Except now there is a craft brew in your hand – and a cup holder on the machine! 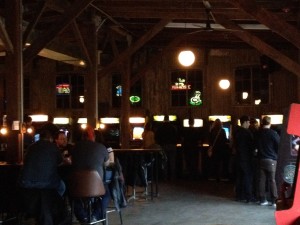 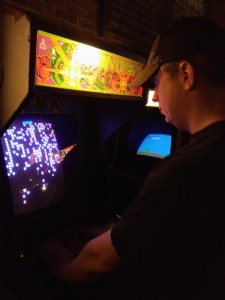 I spoke with Paul Kermizian, co-founder of Barcade, and asked how he and his partners came up with the concept.  He explained, “We just wanted to open a neighborhood bar for ourselves.” After directing a documentary about craft beer in 2003 called, “American Beer” (available on www.amazon.com), Paul knew their bar must serve craft brew, and, with a collection of four arcade games, they also thought that it would be great to put those games in the bar.

The original Barcade was opened in Williamsburg, Brooklyn in 2004.  Recognizing its success, a second was opened in Jersey City in the spring of 2011, quickly followed by the Philadelphia location in the fall of 2011.  Currently a fourth location is under construction in Manhattan.

According to Paul, the response to Barcade Philadelphia has been very positive, as seen by the large number of regulars who are there throughout the week and by the large, “crazy” numbers of people who come in on the weekends.  As further evidence of Barcade’s success, Esquire Channel’s “Brewdogs” show ranked Barcade as their number one craft beer bar in Philadelphia.  I asked Paul if he was surprised about this and he said, “It was unexpected…It was cool to get number one, especially since there are so many great craft beer bars in Philadelphia.”

Paul’s favorite video game at Barcade Philly?  “Tapper” – a Budweiser inspired game originally released in 1983.  You play as a bartender serving mugs of beer to thirsty patrons – but don’t let the unserved customers reach you or they will grab you and slide you down the bar and out the door!  The Budweiser logos and trademarks are incorporated in every aspect of the game – the joysticks are shaped like tap handles, and if you win the bonus round you receive 3,000 points and a hearty, “This Bud’s for you!” 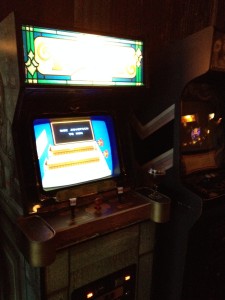 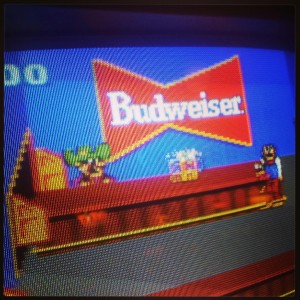 My recent visit to Barcade was truly special because I was there with Chris Steltz of BeerGeekNation.com and Mark Bussler of ClassicGameRoom.com.  Mark, who reviews video games from all eras, was truly impressed and recommends Barcade to his fans: “Kids that grew up in the 80’s going to arcades or playing these games on Atari and NES are now adults.  Barcade wonderfully preserves the arcade games and serves them up with beer and good times – it’s the perfect storm of nostalgia and refreshment!” 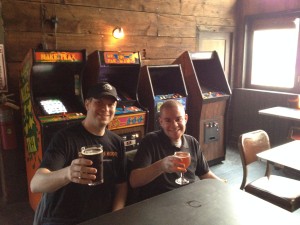 It’s simple – if you ever saved your quarters to play video games at an arcade in the 80’s, and you love craft beer in the 2010’s, then you need to check out Barcade.  The experience of playing Spy Hunter or Ms. Pac Man with a quality craft beer will make you more than happy about being separated from your hard earned quarters! 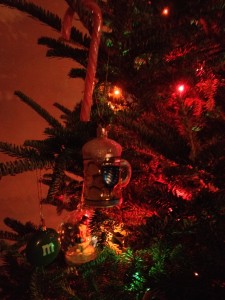 Whether you are drinking a Sam Adams Old Fezziwig Ale, an Anchor Steam “Merry Christmas” Ale, or your own Christmas homebrew, I wish you and yours a peaceful Christmas! 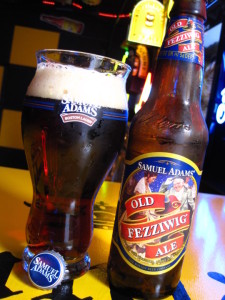 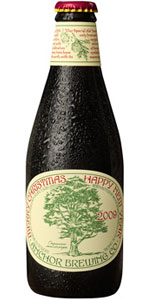 Wait – before you call the police and try to get my name on a registry – “labeorphilist” is the word for a person who collects beer cans and bottles.   And I have to admit, I have a tendency to keep my empties – especially ones with nice labels.  Maybe I am using too much precious storage space by keeping them, but on the other hand, it’s like having your own physical version of Untappd!  Anyway, I’m apparently a labeorphilist and proud of it!  Here’s the most recent addition to my collection: 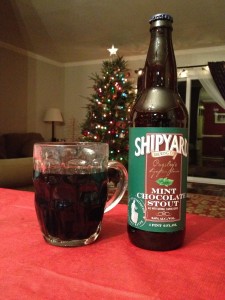 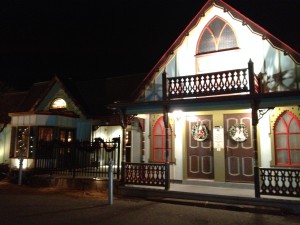 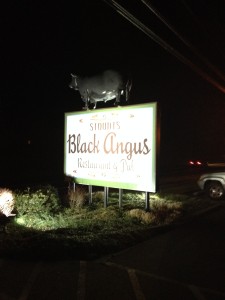 Stoudt’s Brewing has been a mainstay of Pennsylvania craft brewing since 1987.  The brewery, and its attached restaurant, The Black Angus Restaurant and Pub, located in Adamstown, Pennsylvania, are dedicated to traditional German style beer, food and steak.  Decorated in a Victorian style, the Black Angus is a wonderful place throughout the year, but during the holiday season, its true beauty shines through. 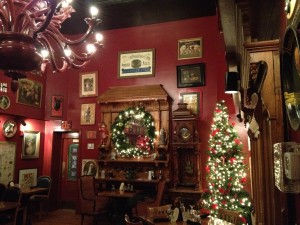 I try to visit Stoudt’s at least once every December, to soak in the Christmas spirit – and of course – the wonderful brews.  When I was there recently, Stoudt’s special IPA was on tap – the Four Play IPA #4.  With tropical notes and a clean finish, it was a nice change from the complex flavors of the holiday porters and stouts common this time of year. 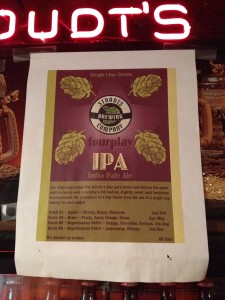 But of course, one sample is not enough.  A flight consisting of Stoudt’s Kolsch, Red Lady, Double IPA, and a special Fat Dog with Cherries on cask, with an accompanying cheese plate, was absolutely called for! 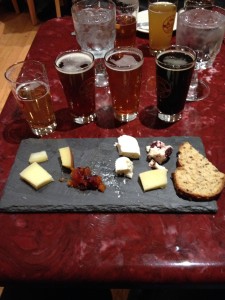 Several of my companions, including Chris from BeerGeekNation, tried the “Whiney Dog,” Stoudt’s Fat Dog Stout aged in red wine barrels for 14 months, and were duly impressed.

The Black Angus is focused primarily on beef, but consistent with their German style brews, the menu offers traditional Bavarian fare – our table ordered wursts and Jagerschnitzel, with brown gravy and spaetzel.  No one was disappointed! 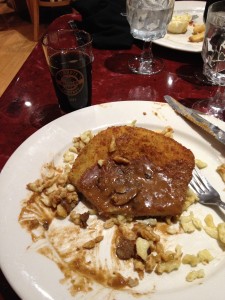 Stoudt’s Black Angus Restaurant and Pub provides a hospitable atmosphere and outstanding beer that will warm you from the inside out after a long day of holiday errands.  If you happen to be in the Adamstown area during the Christmas season (or any season for that matter!), you must visit Stoudt’s.  In addition to the restaurant and the brewery, the “Wonderful Good Market” offers artisanal Cheese and bread, and the Black Angus Antiques Mall is also worth the trip.

Stoudts holds brew festivals several times during the year, and the brewery is open for tours on Saturday at 3:00 pm and Sundays at 1:00 pm.  More information can be found on the Stoudts website. 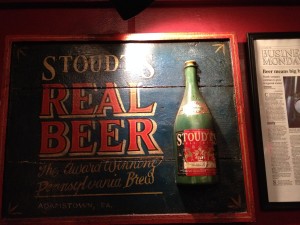 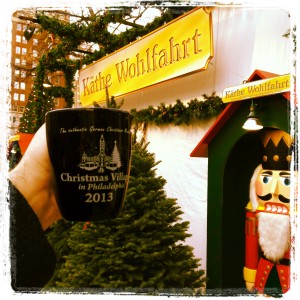 Philadelphia has always been a great city for celebrating Christmas. From the light show and window displays at Wanamakers/Lord & Taylor/Macy’s, to the more recent traditions of the Comcast Center Holiday Spectacular and the Philadelphia Christmas Village in Love Park, beginning on
Thanksgiving weekend, Philadelphia offers a great Christmas vibe – and beverages – for the season! 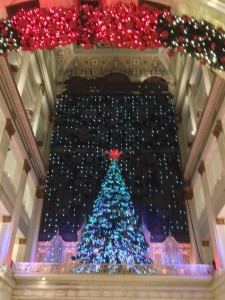 If you get the opportunity to spend some time in the City during this hectic holiday season, make sure you check out these festive spots: 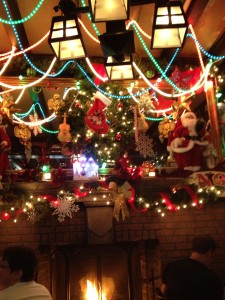 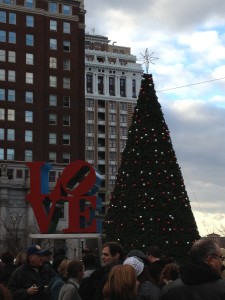 Philadelphia Christmas Village – In its sixth year, the Philadelphia Christmas Village is held in Love Park from November 28 through New Year’s Day.  Vendors in more than 60 booths sell traditional European food, sweets, and drinks – including Gluhwein (mulled wine) from Chaddsford Winery.  The smell of the bratwursts, Gluhwein and roasted nuts, along with the sound of Christmas music and the nip of chilly air, combine to make you feel like you are actually in Germany! 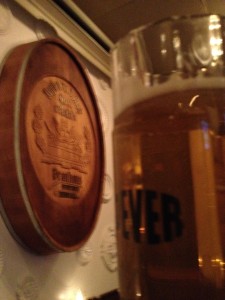 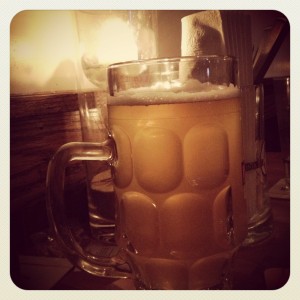 Brauhaus Schmitz – Once you are done shopping at the Christmas Village, continue the German holiday experience by having an authentic meal in Philadelphia’s premier German restaurant.  After being on your feet shopping, I’d suggest refreshing yourself with a Jever Pilsner.  Then – if it’s still available – try the Hofbrauhaus Traunstein 1612er Zwickelbier – only available in three locations in the U.S. and  a treat for lager enthusiasts!

Make sure you take the time during the hustle and bustle of the holiday season to get out and enjoy what Philadelphia has to offer – you won’t be disappointed!

Back in October I attended a seminar sponsored by the Young Lawyers Division of the Philadelphia Bar Association, entitled, “Craft Beer in Philadelphia – from the Cradle of American Libation to the East Coast’s Craft Beer Mecca.”  It was held in the Yards Brewery Tasting Room and featured a panel of well-respected Philadelphia craft brew aficionados, including Don Russell aka Joe Sixpack.  Check out my report on it in the December/January issue (Vol. 15 / No. 6) of the Mid-Atlantic Brewing News on page 25!