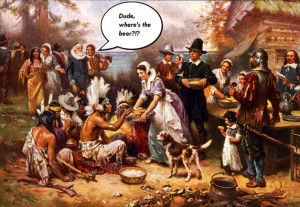 I’d just like to take a moment and wish everyone a safe and happy Thanksgiving!  This is by far my favorite holiday – celebrated by spending time with family, eating (and of course, drinking!) and reflecting on how much we have…rather than how much we want!  So take these next few days to be thankful for the great variety of beer we have in America – and the brewers that create it!

It’s Veteran’s Day!  Make sure
you thank our veterans by buying them a beer.  They certainly deserve it!  Thank you for your service! 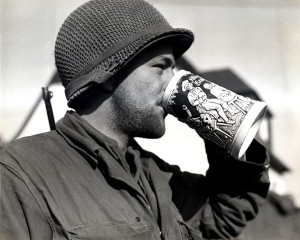 For anyone who’s seen the Beer Hunter Movie, you know the phrase “my local.”  It refers to your local pub – the place that’s convenient, comfortable and tasty.  My local happens to be Forest & Main Brewing Company in Ambler, Pennsylvania.  In operation for a little less than two years, Forest & Main has earned respect in the greater Philadelphia area for its Belgian and English inspired brews.

On my most recent visit, I noticed something missing in the bar area.  The television in the front right corner was gone.  When I asked what inspired the change, I received a response that I should have anticipated – “We took it down because it’s just not us.  It’s not our thing – no one comes here to watch the game.  They come here for the beer.”

I had to agree.  If you’ve been to Forest & Main, you know that it resides in a former Victorian home; the candle lit rooms and hand crafted brews lend themselves more to conversation and music than screaming at struggling Philadelphia sports teams. 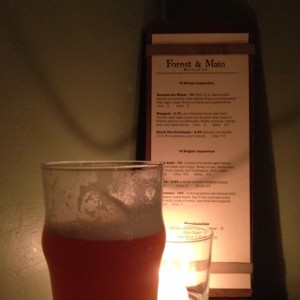 And to my pleasant surprise, Forest & Main replaced the television with a record player – yes, a vinyl record player.  Every Wednesday night is now “Bring Your Own Vinyl Night” and patrons are encouraged to share their favorite records.  As I’ve said before, in my opinion, when you have good beer, good music, and good friends, craft brew is fully experienced.  So kudos once again to my local!

Check out my review of The Craft Beer Kitchen on Beer Geek Nation…and purchase the book for download on Amazon.com.

In the midst of the Oktoberfest celebration, I went to Germany with a few friends.  Well, it wasn’t actually Germany, but it was extremely close.  Brauhaus Schmitz on South Street is in my opinion the closest you will get to the true essence of a Munich beer hall in the Philadelphia area.  When I walked in the front door, I immediately knew that I was in for an authentic treat as I inhaled the distinctive scent of German delicacies – wursts, schnitzel, spaetzel and brown gravy – being cooked in the kitchen.  In addition, the wood paneling and Bavarian blue and white ribbons confirmed that I had suddenly crossed the Atlantic.

We were taken to the Brauer Bund, a large room with a vaulted ceiling and filled with numerous wooden tables.  The chandeliers hanging from the ceiling were draped in festive ribbons; the light blue and white colors evoked anticipation of the fun that was in store. 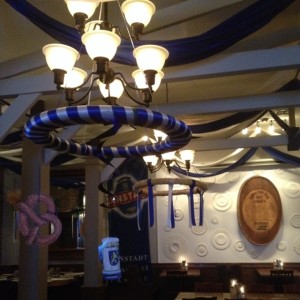 Before taking our seats, we enjoyed our first authentic German beers at the bar.  The selection of German beer at Brauhaus Schmitz is nothing less than amazing; many are imported specially for the restaurant and are not available anywhere else.  I began the evening with an Ayinger Jahrhundert Helles Lager, which was so incredibly crisp and clean it wasn’t long before the glass was empty.  After another round, we were introduced to our courteous and extremely knowledgeable waiter, Guy, who was born in Germany and remains fluent in German.  As he led us to the square, rough-hewn wooden table for twelve, I was reminded of my visit to the Braumeister’s room at the Löwenbräukeller in Munich.  Although the table at Brauhaus Schmitz was not private, its location in the corner of the room, as well as its size, created an intimate atmosphere. 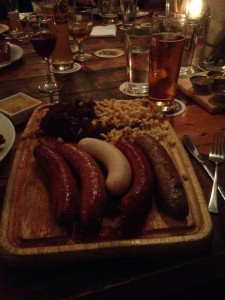 I began my meal with a Bavarian Soft Pretzel and radishes, and for my entrée I shared the Wurstplatte with red cabbage and spaetzel.  My companions tried many things from the menu, including the Schnitzel and PilzStrudel (one of Brauhaus Schmitz’s vegetarian offerings).  I washed down the wursts with ein Faβ of Brauhaus Schmitz’s Oktoberfest. The sweet maltiness perfectly complemented the savory flavors of the wursts, spaetzel and brown gravy.

Rather than dessert (which was hard to decline), I ordered a Licher Oktoberfest, a beer that was created using a traditional recipe from the early 1900s. 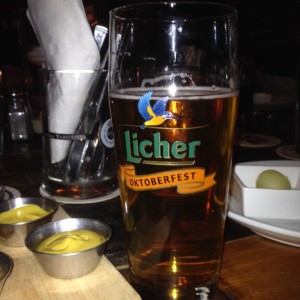 When the dessert plates were all empty, we completed our meal in the traditional German way – with  schnapps.  I chose a herb schnapps, while others selected the Obstler (mixed fruit) schnapps. 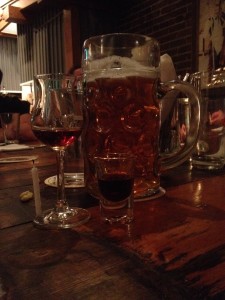 When Guy learned that Chris from BeerGeekNation was with us, he immediately wanted to showcase the best German selections Brauhaus Schmitz had to offer.  As clear proof that Brauhaus Schmitz is dedicated to expanding American knowledge of “craft brewed” German beers, Guy generously shared several samples of his favorites.  We were all pleasantly surprised by the complexity of flavors we tasted in the hard to find brews.

As our celebration came to an end, my faith was restored that an authentic German restaurant has returned to Philadelphia.  The combination of the food, the beer, the ambiance, and the service left me with no doubt that I will be returning to Brauhaus Schmitz to celebrate Oktoberfest again – but most likely long before “Ozapft is!” is announced in 2014!