Happy New Year! Here’s some news and upcoming events to start off 2018:

Iron Hill will roll out their “winter 2018 lineup with the release of cult favorite, Rising Sun: a single-hopped IPA with the intensely tropical Sorachi Ace. For the first time in the brewery’s 21-year history, ‪Iron Hill‬ will place year-round emphasis on their canning program by releasing at least one canned beer every month. Rising Sun will be the first canned offering in 2018, followed by Bedotter (‪February 8‬) and Ore House IPA (‪February 22‬), with more fresh beer coming out throughout the year.

Rising Sun is an American IPA that is single-hopped with Japanese Sorachi Ace for unexpected notes of lemon and coconut in a light, well-balanced beer with a nimble hop kick
Bedotter is a traditional Belgian-style golden ale with complex aroma and notes of plum, spice and banana balanced by refreshing bitterness
Ore House IPA is a Golden IPA with a balanced hop bitterness and wonderful citrus and pine aroma and flavor, weighing in at 6.5% ABV

All three cans will feature fun new designs from Pittsburgh, PA’s Smith Brothers Agency, the latest in an ongoing series of collaborations between the brewery and the firm, including other favorites such as Crusher, Mahalo, Apollo!, Vienna Red Lager, ‪Pig Iron Porter‬, Pumpkin Ale and Oktoberfest.”

Keystone Homebrew Supply began accepting submissions for the 23rd Annual War of the Worts on January 13, 2018. The judging and competition will be held on February 17, 2018 at The Montgomeryville store. Submissions can be made here:  http://www.keystonehops.com/waroftheworts2018/

Check out their new release Mudlust Coffee Porter, brewed with coffee roasted by our friends at Herman’s Coffee! Mudlust is available at both Sly Fox locations now! http://www.slyfoxbeer.com/beer/mudlust-coffee-porter

On January 20, they will host their annual Robert Burns party at the Phoenixville Pub, with the release of their Gang Aft Agley Scotch Ale.

Also, your favorite Sly Fox beers may look a little different in 2018. According to a press release, “With an eye to the future once again, the Pottstown-based brewery will unveil new branding for their entire lineup of core brands and seasonal beers, including a modern update on their playful “Sly Fox” logo. This bold new look accurately represents what Sly Fox does best: telling the outdoor enthusiast’s tale through the lens of fresh beer. The stylish “Y” in the word “Sly” depicts a bushy fox tail, emblematic of the red and gray foxes indigenous to the wild backwoods of Pennsylvania, and the words “Brewing Company” reinforce their reputation as one of the pioneering leaders of the craft beer movement.”

The Brewers of Pennsylvania announced their winter beer selections for 2018 – which is your favorite?

Southern Tier announced new DIPA project – Southern Tier announced new DIPAs in a press release this week – “Southern Tier Brewing Company introduces a new 16oz can Double India Pale Ale collection. The brand new “Science is the Art” Collection showcases their brewers’ scientific exactitude through distinctive commissioned artistry. Featuring vibrant and energetic graphic novel-like labels, the collection will feature six expertly crafted, flavorful episodes that depict a short story throughout 2018. The first episode titled ‘All is Well at the Station’, is set to release early-January.
The six releases feature new flavor profiles, and each label is an episode in a six-part story, as interpreted by sci-fi artist, Christopher Balaskas. These unconventionally named beers each serve as a snapshot of an unfolding science fiction tale. ‘All is Well at the Station’ is an 8.5% ABV, double IPA featuring Amarillo, Chinook, CTZ, and Simcoe hops, giving this brew a big citrusy and earthy character with a dank edge. It is a remarkably drinkable double IPA as the malt bill leaves just enough residual sweetness to perfectly balance its hoppiness. As for the artwork, we see an astronaut flying above a tranquil moon outpost. Surely all is well…or is it?” 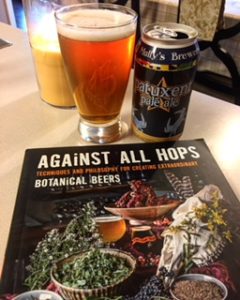 Against All Hops by Butch Heilshorn

In the midst of the electronic onslaught of blog posts, tweets, and visual inundation of digital photos on Instagram, Facebook and Snapchat, every once in a while it is refreshing to just sit and read a physical book while enjoying a well-crafted beer. My most recent foray into physical media was “Against All Hops – Techniques and Philosophy for Creating Extraordinary Botanical Beers,” by Butch Heilshorn, the co-founder of Earth Eagle Brewings located in Portsmouth, New Hampshire.

Against All Hops at its core is a recipe book for some of the brews that Butch and his team have created at their brewery. At the outset, be warned – the recipes are for advanced brewers and the book does not get into introductory methods of brewing, cleaning, or sanitization. The book is a fantastic read because, if you are not familiar with Earth Eagle Brewings, their brews use more than just hops in their beers. Butch has embraced the use of locally foraged herbs and plants in his beer, with the help and knowledge of his herbalist wife April.

While the book contains recipes for their interpretation of standard styles (IPA, Stout, Pale Ale), generally Earth Eagle Brewings beer can be described as “gruit,” an ancient ale that did not use hops as the bittering agent. Instead, all manner of herbs, flowers, and other plant matter are used to create new and interesting tastes. Each recipe is prefaced with a enlightening discussion on the history, tastes, and medicinal qualities of the herbs used in the brew. Along with high-quality photographs of the plants, it makes for an extremely enjoyable read.

In addition to the recipes, Butch explains his philosophy on brewing, which is most definitely on the artistic side of the brewing spectrum (as compared to the technical, scientific side where large, industrial breweries necessarily reside). His concept of humanity’s connection to Earth is well presented, without being judgmental or overbearing, and is clearly reflected in the recipes for his beer.

I thoroughly enjoyed reading Against All Hops, especially in the cold of December and January when thoughts of foraging for locally harvested herbs and plants seem to warm you from the inside. While the book is meant for brewers, anyone who has an appreciation for creative and well-crafted beer would probably enjoy reading the narratives between the recipes. As a home brewer, after reading Against All Hops, I am truly looking forward to trying my hand at a gruit with some home grown herbs this Spring – and maybe a trip to New Hampshire this year to try these recipes for myself!