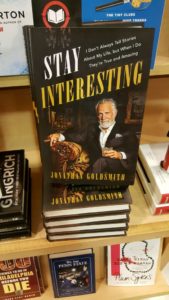 Every once and a while an opportunity presents itself that you just need to embrace.  Recently, I had the opportunity to interview Jonathan Goldsmith, the actor who became famous for portraying Dos Equis’ original “Most Interesting Man in the World.”  His new book, “Stay Interesting:  I Don’t Always Tell Stories About My Life, but When I Do They’re True and Amazing” was released on June 13, so I thought – because of his experience with Dos Equis – he would have some stories to tell about beer.

I had the chance to talk to Goldsmith on a phone interview, to find out a little more about the original “Most Interesting Man in the World.”  I learned that long before he became uber-interesting, Goldsmith began his acting career in Western movies and portrayed many characters in a distinguished list of 1980s television shows including Dallas, MacGyver, The A-Team, Knight Rider, and Magnum P.I. among many other iconic shows of the decade.  He explained that he decided to put the book together after a charity trip to Viet Nam.  “A reporter interviewed me about my career, and when we were done he said, ‘With the stories you have, you should write a book!’  I had already been saving things for my children and grandchildren, but I decided that a book would be a great way to pass along my stories to them.”

Goldsmith told me about his role as a villain in John Wayne’s last movie – The Shootist; his character came to his demise by being shot in the head by The Duke.  The scene needed multiple takes and the blood packets left welts on his face each time.  The producer felt so bad for him that Goldsmith was paid double in the end.  “Stay Interesting” also documents Goldsmith’s audition for Dos Equis in which he was asked to create a story with the last line “…and that’s how I arm-wrestled Fidel Castro.”  Goldsmith explained, “I channelled my friend (and fellow actor) Fernando Lamas, including his accent” and created a story that wow-ed the casting directors and landed him the spot.

The stories in “Stay Interesting” are focused on Goldsmith’s acting career and his interactions with other actors and actresses, including Tina Louise (Ginger from Gilligan’s Island); but the man who was the face of Dos Equis beer for almost a decade admitted that there are no tales in the book that involve beer.  In fact, since leaving Dos Equis, Goldsmith has become associated with Astral Tequila and even makes a brief appearance in a video on the website in which he says, “I told you – I don’t always drink beer.”  Even though “Stay Interesting” does not discuss any interesting beers, it was clear from his stories during the interview that the book will be a fantastic read, especially for anyone who has an appreciation for the Hollywood scene from the 1960s through the 1980s. 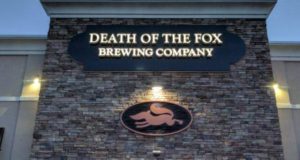 The long awaited Death of the Fox Brewing Company will open to the public on August 14.   Read about this New Jersey brewery on Philly Beer Scene Online Exclusives! 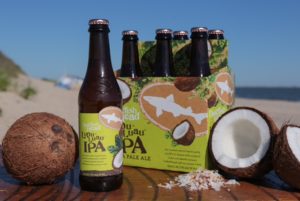 I’ve had a few coconut beers in my time, so when I read this release from Dogfish Head, I have to admit I was intrigued!   Looking forward to trying this one for sure:

Milton, Del., July 7, 2017 – Dogfish Head Craft Brewery is excited to welcome its newest off-centered ale to the party, Lupu-Luau IPA, a coconut-centric India Pale Ale brewed with a tropical trifecta of toasted coconut, experimental hops and dehydrated coconut water. Clocking in at 7.3% ABV and 45 IBUs, this unique take on a tropical IPA begins shipping nationally to taps and shelves in early June. Hazy with a white head, Lupu-Luau IPA gets its name from Lupulin, the hop flower gland containing essential oils, and luau, because Lupu-Luau is a tropical party in your mouth!

Lupu Luau IPA gets its unique, tropical fruit, pineapple and citrusy aroma from an experimental hop that throws generous coconut and woodsy notes into the flavor profile of the beer. “We worked hard to secure the majority of the full domestic yield of this experimental hop crop for years to come and Dogfish is currently the only brewery contracted to purchase it,” says Sam Calagione, founder and CEO of Dogfish Head Craft Brewery. “We use dehydrated coconut water that contains delicious natural sugars and flaked toasted coconut as centerpieces of the beer – ingredients that pay homage to Coco Loco, a coconut blonde brewpub exclusive we brewed back in 2011 and an early example of tropical fruit IPA innovation from Dogfish.”

India Pale Ale is the highest-volume and fastest growing beer style in America and the largest breakout sub-style is the fruit IPA. In May 2017, the Brewers Association reported that the fruit IPA experienced a 236.67% growth in a rolling 52 week period. Dogfish Head is proud to be a leading pioneer in the evolution of the fruit IPA arena as it is the first American brewery to package and ship fruit IPAs nationally. In 1996, Dogfish released Aprihop, a massively hopped fruit India Pale Ale brewed with apricots, and the brewery has continued to innovate and experiment with all natural culinary ingredients including beautiful fruits, fresh citrus and tropical coconuts. To find and enjoy Lupu-Luau IPA and other off-centered Dogfish Head brews in your area, visit www.dogfish.com/brewery/fishfinder. 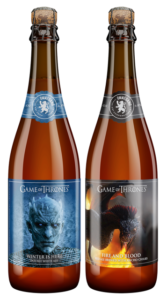 This week, Cooperstown, NY-based Brewery Ommegang, in conjunction with HBO, announced their next beer in their Game of Thrones inspired series.  “Winter is Here” is a double white beer, named for the impending zombie invasion in the show.   The brew will be released in October, as well as a re-release of their Fire and Blood Ale.

The full press release can be seen here. 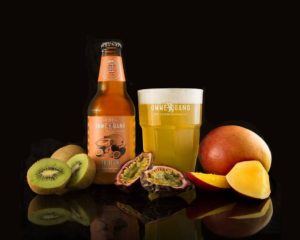 (COOPERSTOWN, NY) Brewery Ommegang is proud to announce a brand new year-round offering, Fruition. This refreshing 5.3% ABV dry-hopped wheat ale begins as award-winning Witte as the base beer and is then given a tropical twist with the addition of mango, kiwi, and passion fruit juices. The result is a slightly tart and fruity, hop-forward beer that’s exceptionally drinkable. It’s the perfect beer to pair with summer.
“As with every beer we brew, we strive to make all the elements blend together, and we think we’re succeeded in that quest with Fruition,” says Ommegang’s brewmaster Phil Leinhart. “Fruition is our first foray into the tropical fruit flavors that consumers find so appealing with New World hop varieties, and we look forward to feedback from fans.”
Brewed with malted and unmalted wheat and oat flakes, and spiced with sweet orange peel and coriander, Fruition is fermented with mango, kiwi, and passion fruit juices then dry-hopped with Citra and Cascade hops.
Fruition pours a pale straw color with moderate haziness and a fluffy white head. Tropical fruit and citrus aromas dominate the nose and the flavor follows suit with tart tropical fruit and citrus up front, followed by a smooth mouthfeel with a medium body. The finish is resoundingly dry with nice effervescence. The dryness and acidity of Fruition make it a perfect beer to pair with all manner of cheeses, particularly cheeses with some funk. The effervescence also makes this beer a great pairing with saltier foods – try Fruition with Belgian frites or chicken & waffles.
Fruition is available now in 12 oz. six-packs and on draft in the following states: AL, AR, AZ, CA, CT, CO, DE, FL, GA, IL, KS, KY, MA, MD, ME, MI, MN, MO, NC, ND, NE, NJ, NV, NY, OH, OK, OR, PA, SC, SD, TN, TX, VA, VI, VT, WA, WI, and Washington D.C. Fans can use the brewery’s beer finder to search for retailers by zip code.
About Brewery Ommegang
Brewery Ommegang opened in 1997 to brew imaginative craft beers across a variety of styles, with particular emphasis and respect for Belgian brewing traditions. Ommegang brews nine ales year-round, as well as an extensive and innovative range of seasonal and specialty ales. The beers have won a national following by connoisseurs of fine beer and are distributed in 46 states and internationally. Ommegang is located on a 136-acre farmstead in Cooperstown, New York and offers free daily tours and inexpensive tastings as well as a 75-seat café, a well-stocked brewery store, and an annual calendar of public events including a summer concert series and a legendary beer festival, Belgium Comes to Cooperstown. Ommegang is open every day of the year except for Thanksgiving, Christmas Day, and New Year’s Day. For more information, contact [email protected], call 1-607-544-1800, or visit www.ommegang.com. Ommegang is a member of the Duvel family of fine beers. Follow Ommegang on Twitter: @BreweryOmmegang, Facebook.com/Ommegang, and Instagram: @BreweryOmmegang

Another new IPA was released by Sly Fox on July 8 – check it out!

Robust quantities of Citra, Denali, and Centennial hops were incorporated into the third IPA to emerge from Sly Fox’ ongoing Hop Project series. 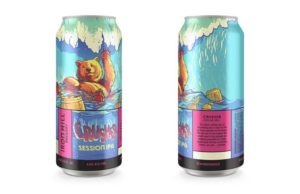 Iron Hill’s popular “Crusher” IPA has been canned and is available for purchase in 4 packs of cans for your enjoyment around your own pool, the beach or the mountains.   See the press release below:

On Thursday, June 29, Iron Hill Brewery & Restaurant will release Crusher™ in cans. Since Iron Hill committed to making more of their beers available to fans in cans, they have consistently released some of their most popular and exciting offerings with an eye towards seasonality; Crusher is a summery IPA perfect for the hottest time of year.
· Crusher™ is a hoppy session ale brewed with a blend of Amarillo, Cascade and Mosaic hops for bright aromas of grapefruit, and ripe pineapple
The refreshing IPA will be available in limited quantities, while supplies last, in four-packs of 16-oz. cans
Like several of Iron Hill’s recent can releases, the can itself features a fun refreshed design from Pittsburgh, PA’s Smith Brothers Agency, joining other Iron Hill favorites such as Rising Sun IPA, Vienna Red Lager and Mahalo, Apollo!

A press release from Alesmith on July 5 announced that their .394 will be available nationwide!   Here’s the release:

The following year, after Gwynn’s passing, AleSmith paid homage to the legendary slugger by introducing a limited-edition imperial or double version available only in the San Diego market. The higher-octane interpretation, dubbed Hall of Fame Imperial San Diego Pale Ale .394, weighed in at 9.0% ABV packed into 22 oz. bottles adorned with Gwynn’s Hall of Fame signature.

Now, for the first time, Hall of Fame Imperial San Diego Pale Ale .394 will be available outside California. Like its predecessor, the imperial .394 is bursting with American hops, delivering a well-balanced palate of citrus, tropical fruit and pine notes.

“Tony’s spirit and the friendship we developed while working together has brought the Gwynn and Zien families incredibly close,” said Peter Zien, owner and CEO of AleSmith Brewing Co. “We hold the Tony Gwynn 5.5K run and walk annually with proceeds benefitting the Tony and Alicia Gwynn Foundation. Hall of Fame Imperial San Diego Pale Ale .394 is just one more way for us to keep the memory of our dear friend alive.”

AleSmith Hall of Fame Imperial San Diego Pale Ale .394, will be available at the AleSmith Brewing Co. tap room and on- and off-premise accounts across the U.S.