Although the calendar says it’s been autumn for a few weeks, the weather hasn’t agreed.  But finally we have a perfect autumn day here in Pennsylvania – temps in the mid 60s, crystal clear blue skies and a warm sun!   Now it is time to celebrate with autumn beer!

In my opinion, there are three main categories of fall beer – Harvest Ales, Pumpkin Beer, and Oktoberfest beer.  While I often admit that I would drink pumpkin beer all year round if I could (and I do when I find it – cheers to you Pocono Brewing and St. Petersburg Brewing Co), there is something that is just “right” about drinking pumpkin beer when the pumpkins are ripe and used in decorations everywhere.  For some of my favorite pumpkin brews, try the original Dogfish Head Punkin Ale, Troegs Master of Pumpkins, Iron Hill Pumpkin Ale and Lancaster Baked Pumpkin Ale. 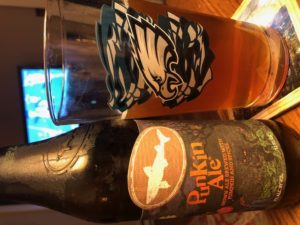 Harvest Ales are most definitely a fall beer because they are made immediately after hops are harvested in late August/early September and are meant to be consumed “fresh”!  Be on the lookout for these brews early – because they go fast! 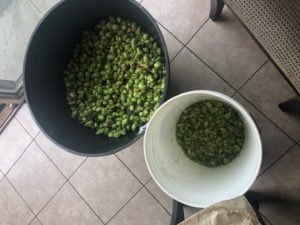 And then there is Oktoberfest beer – Prost!  This year, Germany’s official Oktoberfest was held from September 22 through October 6, and I had my fair share of Oktoberfest offerings from both German and U.S. brewers.  A little recognized fact about Oktoberfest beer is that there are two different styles – the traditional beer consumed at Oktoberfest was a Marzen style – a maltier, sweeter beer that packed a little punch.

But in the 1990s, the official Oktoberfest beer was changed to “Festbier,” a yellow, lower ABV beverage -probably to encourage more consumption (and less drunken incidents) by the tourists in the tents! As a result of the change, you can find the two different versions of Oktoberfest beer in most US brewpubs and bars these days.  A few of my favorites – Hofbrau Oktoberfest (Festbier); Victory Festbier (Marzen); Stoudts Oktoberfest (Marzen).

So whatever your choice, enjoy these seasonal brews now!  Before you know it, the comfort of autumnal brews will be gone and the dark spiciness of holiday beer will appear on the taps!